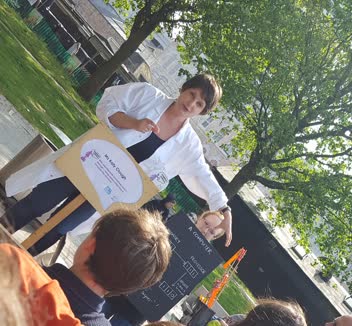 I work on Einstein’s theory of General Relativity (GR), a theory of gravity which tells us that spacetime is curved by the presence of energy and matter. What is fascinating is that GR really challenges your inbuilt perceptions about what time and space actually are. Human brains evolved in a weak gravity environment and as a result we have an effective, but incomplete, model of how things work which we rely on to solve everyday tasks. Physics helps us to probe deeper and when we do what we find is absolutely mind-blowing – GR is completely counter-intuitive in many respects. I sometimes want to shake people on the street and say “Do you know about this? Do you understand what it means? Because it’s amazing, and I can’t believe that you will live your whole life without thinking about it”. Since I don’t want to be arrested for shaking people in the street and telling them about my research, I try to do it through official events, some of which are listed below.

Science is for everyone

"We look at science as something very elite, which only a few people can learn. That's just not true. You just have to start early and give kids a foundation. Kids live up, or down, to expectations." - Mae Jemison (the first black woman in space)

I am very passionate about getting more women into science, and helping them stay there. It is shameful that women end up, for varied and complex reasons, excluded from such an interesting, rewarding and important career.

In March 2019 I ran a workshop "Simulating the Stars" for female students as part of the KS4 Study Day ‘Women in Astronomy’, see here.

I was an invited speaker at the Women in Physics Group meeting, at Lancaster University (UK) in May 2018, and gave a talk entitled "Staying in the Pipeline". You can see my slides here

In May 2016 I spoke at the Soapbox Science event to promote women in science. You can read more about this and my thoughts on the event here.

Whilst at King's I was actively involved in their many excellent initiatives to promote Women in Science at the university and in local schools, including the annual Ada Lovelace Day event.

I appeared in the BBC Radio 4 programme The Curious Cases of Rutherford and Fry in the two part episode "A Weighty Matter" here and here.

I was invited to give the IoP Oxford Lecture on "Gravity's role in the story of our Universe", which you can watch here.

I spoke at the Pint of Science event in London. My talk, "Am I crazy, or is it physics?" was later made into a podcast on the KnowItWall website which you can find here, and republished at pionic.org

I was involved in the Monopole Quest, Royal Society Summer Exhibition in the Summer of 2015. Further details can be found here.

I was a tutor with the Access Project, an initiative that tries to get more students from disadvantaged backgrounds into Higher Education.