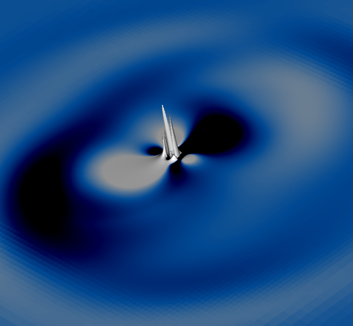 My research focuses on numerical solutions to Einstein’s theory of general relativity (Numerical Relativity (NR)), in cosmological and astrophysical contexts. The Einstein Equations govern the evolution of matter and energy on cosmological scales, and in systems where there are strong gravitational effects, such as around black holes. Often, approximations are made to simplify the equations, such as assuming spherical symmetry, which allows the equations to be solved analytically. Whilst these assumptions are valid for many problems, certain solutions can only be found numerically. The idea is to start with some initial conditions, and evolve them forward in time, to see "what happens next”. In this way we can make predictions about what we should observe, and so use observations to rule out or confirm potential theories.

I am one of the key authors and devlopers of the publicly available GRChombo Numerical Relativity code (www.grchombo.org) which I am applying to two main areas of research. Firstly, inflationary theory, which is a widely accepted paradigm in which the universe expanded rapidly at early times. I want to understand whether this theory still functions in the presence of the large inhomogeneities which should have existed prior to its commencement. The aim is to better understand these earlier times, or to find evidence to support alternative models. Secondly, I am interested in the interaction of fundamental fields with black holes. Observable signals at gravitational wave detectors or unexplained features in astrophysical structures may help us to identify new particles, including those making up the poorly understood “Dark Matter” which is found in galaxies. Numerical simulations are essential for predicting and quantifying such effects.

Further details of my research and a list of publications can be found on my Inspire profile at inspirehep.net.